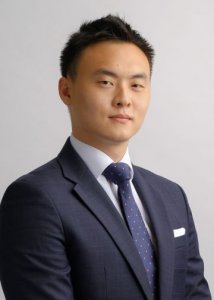 Tommy Junho Hong’s determination and hard work brought him success in athletics, academia, and in his legal profession. Tommy brings this “never quit” attitude in pursuing the best interests of his clients.

Tommy joined Whitten & Lublin after completing his Dual Canadian/American Juris Doctor (J.D.) program at the University of Ottawa and Michigan State University. During his legal studies, Tommy demonstrated academic success as a Dean’s Honour list recipient and was also awarded the Jurisprudence Achievement Award for the highest standing in an International Business Transaction course.

Tommy worked for the Office of the Law Clerk and Parliamentary Counsel of the Senate, where he assisted in the drafting and amending of legislative bills, and prepared reports on the legal effects of the amendments. Tommy also spent a summer interning at an international law firm in Korea and at the Department of Justice Canada. During the school year, Tommy gained experience as a caseworker with the Immigration Law Clinic at Michigan State University, representing low-income individuals in the U.S. Immigration Court. Tommy also worked as a legal student at a boutique employment law firm in which he handled a wide range of employment and labour cases. These experiences instilled in him a strong passion for the law, particularly litigation and complex workplace law.

Outside of work, Tommy is an avid sports enthusiast, who plays multiple sports including basketball and baseball. He is also a proud fan of the Toronto Maple Leafs and Toronto Raptors. Tommy is bilingual in English and Korean.

Tommy Junho Hong can be reached at tommy@whittenlublin.com

“My husband had the pleasure of dealing with Tommy Hong and he was excellent! Very professional with my husband’s best interest at heart! Thank you for the positive outcome Tommy! We highly recommend you and the whole team!”