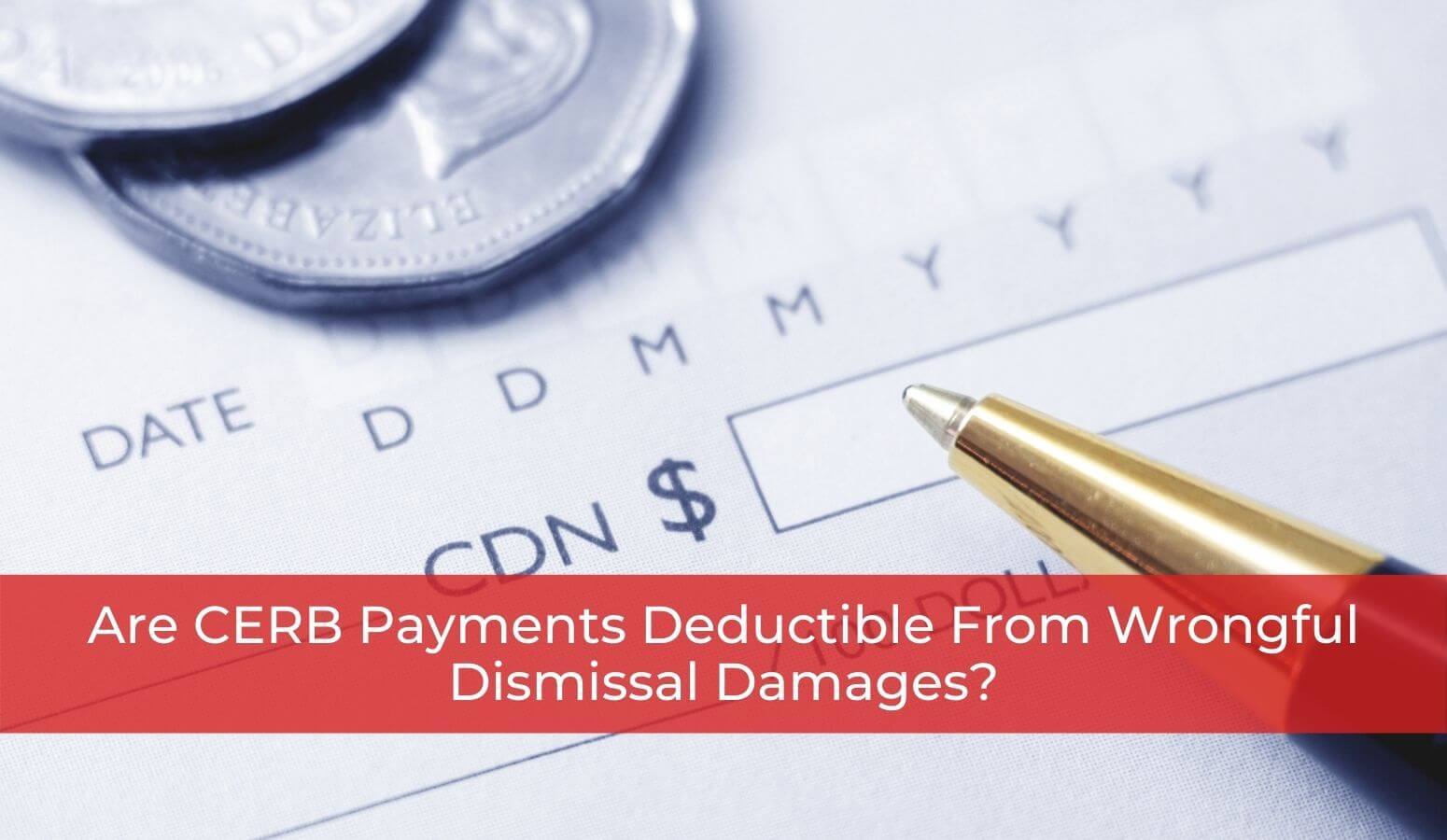 Amid the Covid-19 pandemic, the Canadian government has provided various social benefit programs, including the Canada Emergency Response Benefit (“CERB”).  However, it was unclear whether CERB payments should be reduced from wrongful dismissal damages, until recent cases shed some light.

Two Ontario Superior Court of Justice decisions (Fogelman v. IFG, 2021 ONSC 4042, “Fogelman”, in June; and Iriotakis v. Peninsula Employment Services Limited, 2021 ONSC 998, “Iriotakis”, in February) have suggested that CERB payments are not deductible from wrongful dismissal damages. Fogelman mirrors the reasoning in Iriotakis that the CERB payments should not be treated as income for purposes of mitigation when calculating wrongful dismissal damages. Indeed, neither an employer nor an employee needs to pay into CERB in the same way they contribute to Employment Insurance premiums. In addition, the Iriotakis decision was also based on the employee’s limited entitlements from the employer post-termination relative to his actual pre-termination earnings.

In Iriotakis, the plaintiff was not entitled to commission income upon termination, pursuant to the employment contract. There was evidence that Mr. Iriotakis’ salary (excluding commission) was less than half of his actual income.  Therefore, when the Court calculated wrongful dismissal damages based on Mr. Iriotakis’ salary, it did not deduct the CERB payments, because retaining the CERB payments would not put Mr. Iriotakis in a better economic position than he would have been if his employment was not terminated.  Nevertheless, in May, the British Columbia Supreme Court made an opposite decision in another case based on a similar reasoning.

The BC Court in Hogan v. 1187938 B.C. Ltd., 2021 BCSC 1021 (“Hogan”), held that the CERB payments that the plaintiff had received during the reasonable notice period should be deducted from the amount of wrongful dismissal damages awarded, due to the fact that the CERB payments raise a compensating advantage issue. Mr. Hogan was not in a similarly vulnerable situation to Mr. Iriotakis in an earlier Ontario case. Mr. Hogan’s wrongful dismissal damages were calculated based on his actual past income; thus, he did not suffer an additional loss in commission income. The BC Court distinguished Hogan from Iriotakis, and found that if Mr. Hogan received both the wrongful dismissal damages and the CERB payments, he would be put in a better position than he would have been had the termination not happened.

It is important to note that Hogan was decided by a BC court, and therefore is not binding in Ontario. The decision could be persuasive for future Ontario decision-makers, though the exact same reasoning has not been applied in Fogelman, an Ontario Court decision which was released just a few days after Hogan. Moreover, Fogelman says that section 12 (1) of the CERB Act imposes a repayment obligation, whereas Hogan says there is no evidence that the plaintiff will have to repay the CERB. Shortly before this article was submitted, the British Columbia Supreme Court decided not to deduct CERB payments from wrongful dismissal damages in a different case, Andrews v. Allnorth Consultants Limited, 2021 BCSC 1246, stating that it is likely the plaintiff will have to pay these benefits back.

Whether you are an employee or an employer, we at Whitten & Lublin are happy to provide insight and advice into your specific circumstances. If you are looking for employment lawyers and would like more information about what Whitten & Lublin can do for you, please contact us online or by phone at (416) 640-2667 today.