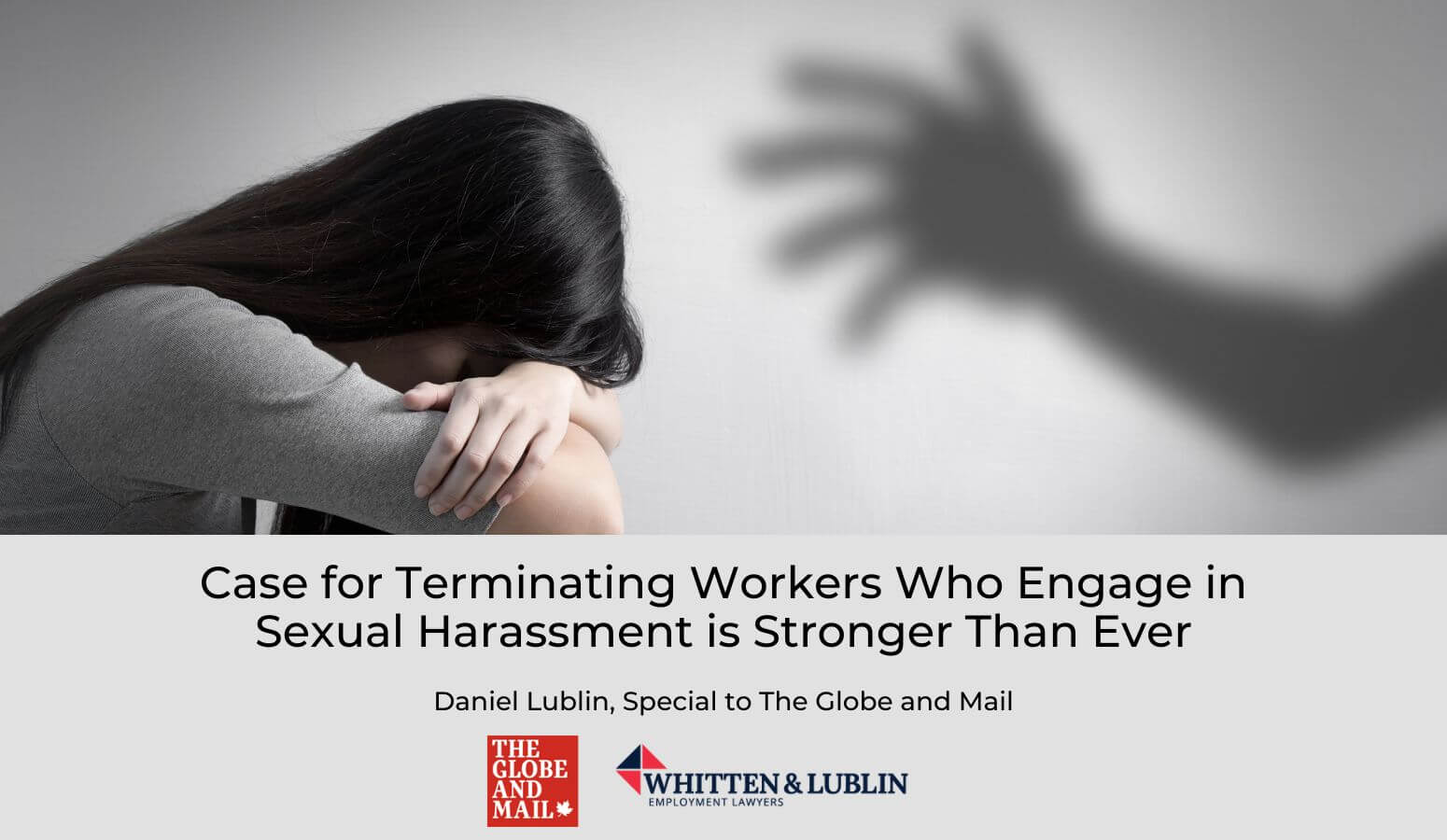 The case for terminating workers who engage in sexual harassment is stronger than ever. Previously, allegations were treated differently by both companies and courts.

Employers seldom hired independent investigators to explore the allegations and make findings of fact, and often responded to incidents of alleged harassment through warnings and requiring an offender to issue an apology. Workplace sexual harassment was not condoned, but outside of the most serious and prolonged cases, offenders were unlikely to be dismissed. I had a number of cases where harassed workers felt they had no other option but to resign and sue their employers, alleging a constructive dismissal because their harasser was still employed and, in some cases, still in a position to manage them.

Fortunately, a sea change has occurred. The standards of acceptable workplace conduct and how courts measure transgressions are now much different.

Two recent appeal court rulings demonstrate the shifting attitudes of the courts toward workplace sexual harassment. It signals to employers that a zero-tolerance approach toward such incidents will receive deference. Both employers and workers should pay close attention.

Even a single incident of unwanted physical touching can justify the termination of a long-term employee. In the latest case on this issue, the Ontario Court of Appeal upheld the dismissal for just cause of a long-term manager who smacked a female co-worker on her rear end following an incident where the two were joking around. The workplace had a social atmosphere marked by regular joking and banter and sometimes employees touching each other in jest. However, in this case, the male employee did not seem to appreciate that his actions were offside. He joked with co-workers that he would charge them a fee to touch his hand and later appeared to mock the female employee when describing the incident. This led her to issue a formal complaint.

He was fired without severance, a punishment normally reserved for only the most serious misconduct. The Court of Appeal concluded that the social atmosphere of the workplace and the offender’s 30 years of unblemished service were not enough to save him from the conclusion that his employer had just cause to dismiss him. Importantly, the court stated that it was a workplace atmosphere that could no longer be tolerated as those on the receiving end of personal “jokes” may not view it that way.

In a 2021 Alberta decision, an appeal court overturned a lower court’s determination that the termination of an employee who lifted a female co-worker’s shirt was unjustified because that misconduct was at the lower end of the spectrum of seriousness. The appeal court reasoned that all forms of sexual harassment are serious forms of workplace misconduct and to find otherwise would minimize the seriousness of that behaviour.

Both cases demonstrate that despite the high standard required to uphold the dismissal of an employee for just cause, when it comes to workplace sexual harassment, employers will be given more leeway than ever before and taking a zero-tolerance approach will likely be treated as a reasonable response.

Practically, for Canadian workplaces this means employers have a legal duty to provide a workplace that is free from discrimination and harassment. In some provinces, this duty is now enshrined in occupational health and safety legislation and extends to requiring employers to enact policies, investigate any complaints and to notify the complainant of the results of such an investigation. This places the onus on employers to demonstrate that they have taken all complaints seriously and are committed to addressing them in an attentive manner. Failing to do so exposes the company to civil and regulatory claims and the possibility of negative publicity that can seriously damage their brand and reputation, especially if it appears that the company condoned such behaviour or knowingly allowed a toxic culture to subsist.

However, employers need to go further than just having a policy in place. The gold standard is to ensure an actual cultural change occurs. Employers should ensure policies are distributed to workers, along with recurring training that requires workers to sign off on having reviewed the policy and received the training.

To truly effect change, employers must consistently adhere to those policies, particularly to demonstrate that contraventions will be dealt with severely and not condoned. As the above two cases demonstrate, it is difficult to fault an employer for following a zero-tolerance approach to sexual harassment, especially if that approach is always followed.

Finally, in light of the changing views on workplace sexual harassment, workers who are dismissed because of allegations made against them will have to pause and reconsider before proceeding with wrongful dismissal litigation. Allegations of sexual harassment, once made public, can seriously undermine their careers.

Daniel A. Lublin is a founding partner of Whitten & Lublin, Employment & Labour Lawyers. Do you have a question about workplace law? You can e-mail him here.