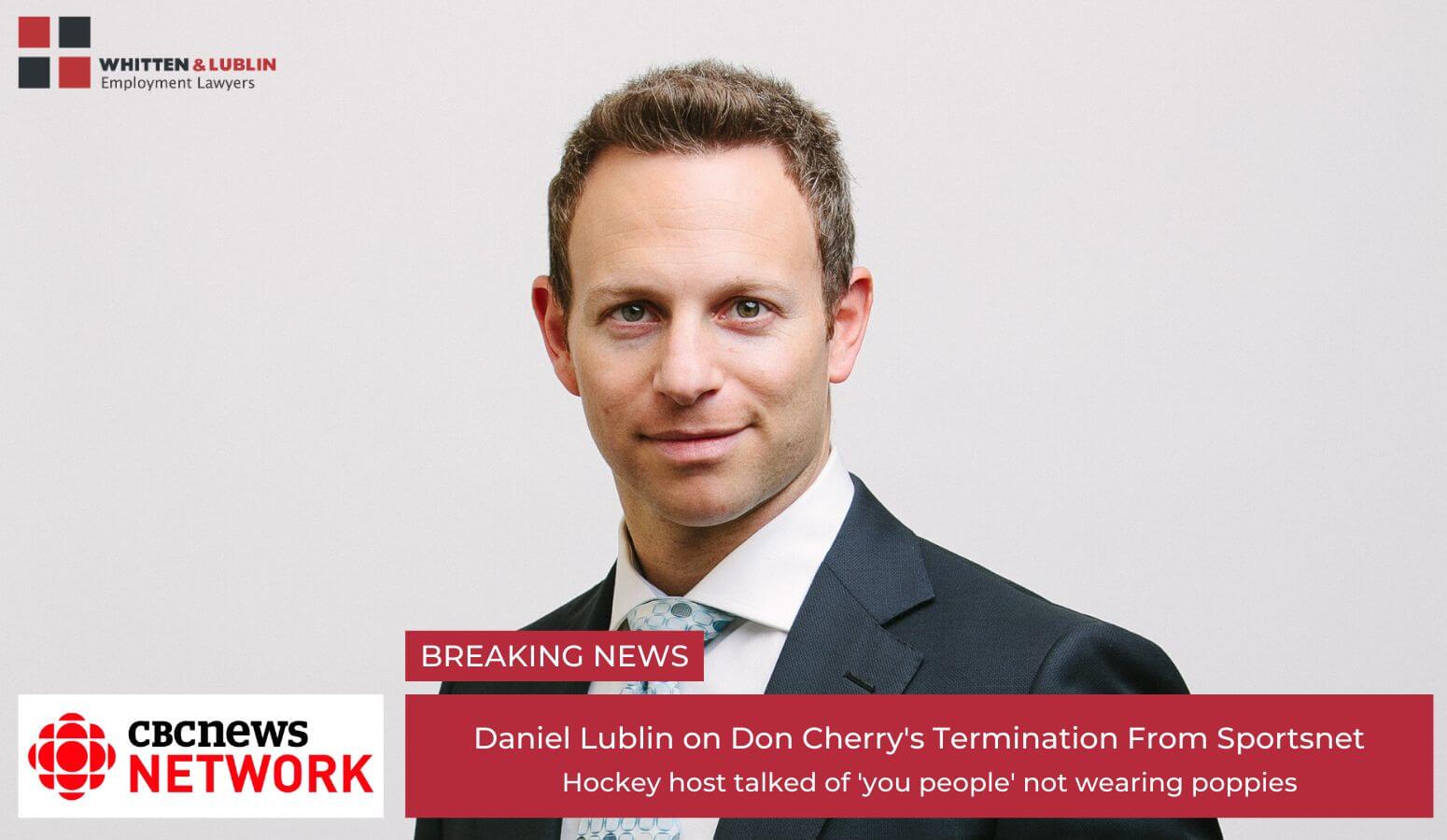 Daniel Lublin, a Partner and an employment lawyer at Whitten & Lublin Employment Lawyers, chats with CBC News about Don Cherry’s termination for cause from Sportsnet as the host of Coach’s Corner after he made comments last Saturday night about immigrants to Canada not wearing poppies to support the veterans.

This is as much as it is a story of politics and sports, it very much also is also a story of law. People are wondering did Don Cherry get fired because of what he said or because of the incredible amount of backlash Sportsnet received?

Daniel Lublin, “Both! And as we see this with story, court of public opinion sometimes takes priority over court of law. I think the public backlash accentuated the problem. Rogers was left with no choice, I give a thumbs-up to the firing.”

Why do you give a thumbs-up to the firing?

Daniel Lublin, “A fundamental mistake would be to confuse “freedom of speech” with “freedom from workplace consequences” from a workplace perspective. Cherry was entitled to his opinions, he was entitled to say what was on his mind, nobody had an issue with it. The issue is that cannot be made immune from workplace consequences when it crosses a line and puts the employer into jeopardy. The public backlash was severe, politicians complained, ratings could be affected – Rogers had no choice.”

Is there anything that Cherry could have done from your perspective that would have mitigated this?

Daniel Lublin, “As in all workplace cases, courts will take into account, whether or not an apology was forthcoming, was it genuine, was it made immediately, was it prompted by other factors. So, Cherry’s refusal to apologize, certainly hurt his chances if that was still in play.”

Now, are the employers legally obligated to continue paying him – what happens to the compensation he was going to receive?

Daniel Lublin, “Unclear. But, I would expect in a case like this, it would have been a termination for cause, or would have been an agreement where he would resign without any compensation. I also think Cherry may be part of a Union that may have an impact. But in a normal workplace environment, when a company distances itself from an executive or from a public figure who does something untoward, there is a termination for cause event and there is no compensation paid.”

Would Cherry be in a position to sue Sportsnet?

Daniel Lublin, “Firstly, if Cherry was a part of a union, then “no”, he would have to file a grievance through the union’s grievance procedures. But in other types of cases, where we are not dealing with a unionized scenario, one could expect there could potentially be wrongful dismissal proceedings and the outcome of that case would depend on whether or not Cherry’s conduct meets the test for just cause for dismissal.”

Now you mentioned the issue of public pressure. We talked about how much backlash Sportsnet received, not to mention how much Don Cherry received and they are beholden to what the public wants to some degree. What if a petition comes out and it gets hundreds of thousands of signatures saying we want Don Cherry back? Is there a scenario where that could be used to get him back on the air or is it done?

If you were advising Don Cherry, what would you tell him?

Daniel Lublin, “The first thing I’d tell him is that you have the right to stand behind your comments, but you may want to consider a public apology and a genuine heartfelt one. Today, we did hear from Cherry and he refused to walk it back. He said he won’t be treated like a robot. He may hold that feeling, but I think where he misstepped is, he seems to forget that this was a public broadcast, Hockey Night in Canada is the form of an institution in Canada, and he could’ve been a little bit sensitive to the comments he made.”