Fired While Pregnant or Upon Returning from Maternity Leave? 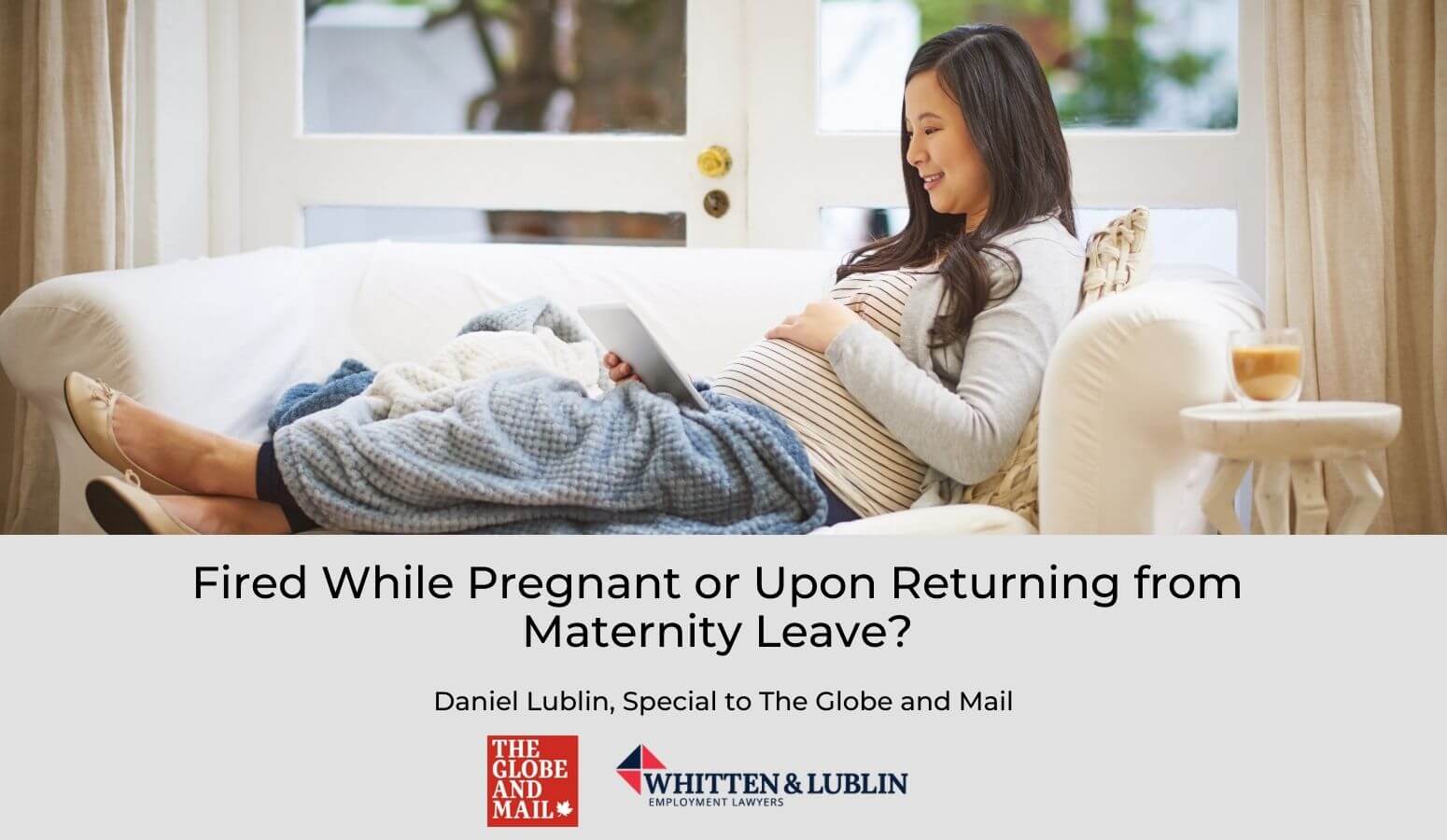 For many working women across Canada, a worst-case scenario is beginning to unfold as many are not being recalled following their maternity leave. According to the 2021 Maternity Leave Experience Report from advocacy group Moms at Work, one-third of mothers surveyed reported they were discriminated against in the workplace because of becoming a mother or caring for children, and more than half stated that their employer was unprepared for them to return following their leave of absence.

Unfortunately, it appears that the pandemic may actually be boosting employers’ abilities to sidestep the rules. This should come as no surprise since lockdowns and layoffs seem to disproportionally affect the most vulnerable workers, especially new or soon-to-be mothers and even fathers who choose to take parental leave.

Just last week, my office received three separate inquiries from individuals concerning related dilemmas. Two individuals were reinstated following lengthy maternity leave – but only to inferior jobs. The third employee did not hear from her employer until the day her leave was expected to end, only to be told that “due to restructuring associated with COVID-19,” she no longer had a job. These types of claims are becoming far more common.

Human rights and employment standards legislation forbid termination in circumstances where pregnancy or maternity leave plays any role in the dismissal. Those same statutes require the reinstatement of employees following their leaves of absence, with varying subtleties. For instance, Ontario’s Employment Standards Act specifies that reinstatement must be made to the position the worker held prior to the leave or to a “comparable role” if their original position no longer exists.

Given these protections, why do dismissals happen despite these rules? And why are there so many cases where women are not offered their job back following a maternal leave? The answer lies in a statutory exemption that unfortunately can sometimes operate more like a loophole. Most of the applicable workplace statutes that forbid termination due to pregnancy allow it in circumstances that are deemed unrelated. The word “unrelated” is the key. If an employer can establish that there are other bona fide reasons for a dismissal that are completely separate and apart from the employee’s pregnancy or leave of absence – such as closures, layoffs, and genuine downsizing – then it need not reinstate the employee and can proceed with dismissal without it being deemed illegal.

However, not every company is playing by the rules – and some may be using the pandemic as an excuse. What should you do if you suspect that your employer may be trying to bend the law for maternity leave?

If your employer does not reinstate you following pregnancy or parental leave, you should scrutinize the reasons you are given – or sometimes also the reasons you are not given. Human rights and labour investigators are invariably skeptical of employers who claim that an employee’s position is no longer available following their leave and require employers to demonstrate, in no uncertain terms, that a worker’s role or duties simply no longer exist anymore or that the reasons for dismissal are truly unrelated to the leave. This may arise where there is a larger-scale restructuring, and your entire department is discontinued, or where there is genuinely no longer a need for your role. However, if your job functions are being performed by other employees or even contractors, or the individual who was supposed to act as your temporary replacement keeps your job, your employer may be breaking the rules.

Employers who do not follow the requirements of human rights or labour standards legislation have a lot to lose. In these cases, adjudicators have broad remedial powers to award damages that far exceed what an employee would have otherwise received if their pregnancy or leave did not play a factor in the reason to dismiss them. Adjudicators can award reinstatement (with back pay from the date of dismissal), but more often will award the employee’s lost wages from the date of termination to the date he or she found another job – which will often be many months later, particularly during the pandemic.

There may also be a new trend emerging that causes employers to pause longer before dismissing employees who are pregnant or returning from leave. Even where the pregnancy does not actually play any factor in the reasons for dismissal, there may be grounds for increased severance damages. In one recent case, a pregnant employee was terminated after only four months (for reasons unrelated to her pregnancy), but she was nonetheless granted five months’ severance. Normally, this would be an extraordinary award of severance for such a short-term employee. However, the court reasoned that her pregnancy would significantly impact her ability to find other work. This makes complete sense – few employers would consider hiring a new employee so close to their due date.

With the reopening of the economy, more clashes of this nature are set to play out in the courts and human rights tribunals across the country. Employers will be smart to tread very carefully or risk running afoul of this area of workplace law.

Daniel A. Lublin is a founding partner of Whitten & Lublin Employment & Labour Lawyers. Do you have a question about workplace law? If you are looking for employment lawyers and would like more information about what Whitten & Lublin can do for you, please contact us online or by phone at (416) 640-2667 today.