Majority of Canadians’ Work Refusal Claims Being Denied Amid COVID-19 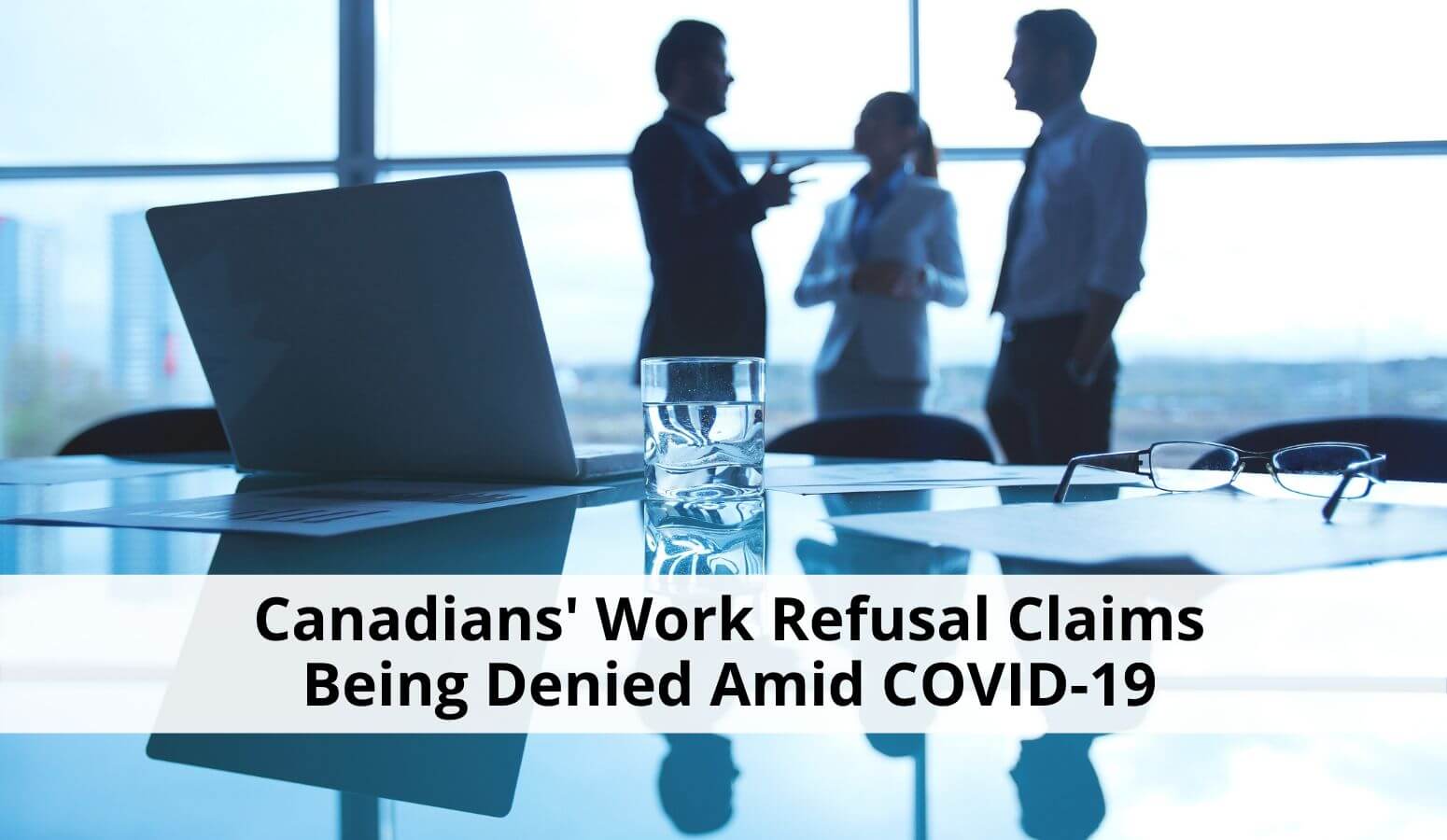 As Canadians head back to work after spending months at home, new data suggests that some provinces are seeing more work refusal claims amid the COVID-19 pandemic.

However, provincial labour authorities say the majority of those claims have been denied because inspectors found no danger to the health, safety or physical well-being of the workers.

Ontario has seen the largest spike in work refusal claims with 278 COVID-19 related refusals from March to June, according to provincial numbers.

The provincial Ministry of Labour denied 277 of those claims.

“For workers to initiate a formal work refusal, the danger must be based on current conditions they’re exposed to. When the requirements for a work refusal are not met, the issue will be treated as a complaint,” Ontario Ministry of Labour spokesperson Janet Deline said in an email.

While employment lawyer Stephen Wolpert said many of these work refusals may be legitimate, he told CTVNews.ca that the employee’s concerns may be out of fear for the virus, even if that fear isn’t necessarily reality in their workplace.

“One of the challenges is that employees are operating on their own subjective fears that aren’t always supported by science. In other words, they perceive a risk, but the risk isn’t necessarily there… Sometimes employees have real concerns but those concerns aren’t necessarily borne out by the science,” Wolpert said in a phone interview from Toronto on Monday.

Wolpert, who is a partner at Canadian law firm Whitten & Lublin, said Canada’s current labour laws were not designed to deal with a global health crisis.

“If you are a ministry inspector and you walk into a workplace and you see a machine that doesn’t have a guard on it, that’s easy to identify and [understand that] if somebody gets too close, they’re going to cut themselves. But when you walk into a workplace and it’s just a few people milling around, there’s nothing obvious or specific that you can necessarily point to that’s going to say, ‘there is the problem that needs to be fixed’,” Wolpert explained.

WHY A WORK REFUSAL CLAIM MAY BE FILED

Wolpert said some employees may file work refusal claims amid the pandemic if they are concerned about possible exposure to COVID-19 at the workplace, a lack of personal protective equipment (PPE), a lack of physical distancing, or inadequate sanitization at the business.

After Ontario, Newfoundland and Labrador saw the next highest number of work refusal claims at 27, followed by Quebec with 24 refusals.

Newfoundland and Labrador’s claims were all in the health care industry and investigations found that there was no real danger to the workers as detailed in the claims.

“The investigations are complete and decisions have been communicated to all parties. The decisions supported the measures taken by the employer, which were considered reasonable in all cases,” according to a statement from the province’s Occupational Health and Safety Division of Service.

Of Quebec’s 24 work refusal claims, only one case was the subject of a decision confirming that the danger was justified. The inspector’s analysis found that there was no risk to employees’ safety with the other claims.

Stuart Rudner, an employment lawyer and founder of Rudner Law in Toronto, told CTVNews.ca that employers are required to provide a safe work environment, which means that an employee has grounds to complain if no attempts at implementing physical distancing and cleaning procedures have been made.

“If somebody feels that their workplace is unsafe, they would first go to the employer and then explain what their concerns are. The employer has a duty to look into it and make any changes that are necessary but if the employee is still unsatisfied that is when they go to the [province’s] Ministry of Labour,” Rudner said in a phone interview from Toronto on Monday.

“Then the Ministry of Labour would assign an inspector to look at the specific workplace and see if it’s unsafe.”

However, Rudner said Canadians are required to return to work even if they don’t think it is safe yet to do so.

“There seems to be this general perception out there that work all of a sudden become optional. And I know that we’re in very strange circumstances and a lot of people have been home for a while, but the reality is if you’re recalled to work its not a choice you have, you’re expected to return,” Rudner said.

Rudner explained that workers are only allowed to not return to work if they qualify for a statutory leave of absence for reasons such as child-care obligations or medical conditions, if they have a right to accommodation under human rights, or if the workplace is deemed unsafe by provincial authorities.

The employee does not get to decide whether the workplace is safe, Rudner added.

“It is no different with COVID-19 times than it is any other time — there’s always been a right to refuse unsafe work,” Rudner said. “But unless you fall within one of those exceptions, there is no right to refuse to work just because you prefer not to or you generally feel unsafe going out into public.”

WHAT TO DO IF A WORK REFUSAL CLAIM IS DENIED

For those employees who have had their work refusal claim denied but still don’t feel safe returning to work, Rudner said they have little recourse.

“There really isn’t much they can do. There are some appeal rights or you can request a reconsideration although frankly, it’s pretty rare,” Rudner said, adding that he has been encouraging his clients to talk to their employers to see if there are alternative solutions both parties can agree on.

“Go to the employer and say ‘Look, I’m not comfortable going to work right now, will you allow me to stay on leave of absence?’ and many employers are willing to because they don’t need 100 percent of the workforce right now,” Rudner said. “But that’s purely voluntary on the part of the employer.”

Wolpert said if no solution can be reached and the employer insists that the individual returns to work, the employee has little choice in the matter.

“If you’re still not satisfied that it’s safe, you’re left with a really lousy choice: either you go into a workplace that you feel is unsafe or you stop working and risk having somebody tell you you’ve abandoned your job,” Wolpert said.

Despite the pressure to return to work, Rudner said employees should still file a work complaint if there is a real risk of danger. But if it is “more of a general concern about going into public,” Rudner suggests employees ask their employer if they can continue working from home or request a short-term leave of absence.

Rudner said if those options don’t work, the employees must do their best to ensure their own safety.

“You’re going to have to go to work but just make sure that you take as many precautions as you possibly can, and if you do see if there is an unsafe condition at work that’s when you should be reporting it,” he said.