Unconscious Bias – Firing Workers When an Illness is Involved 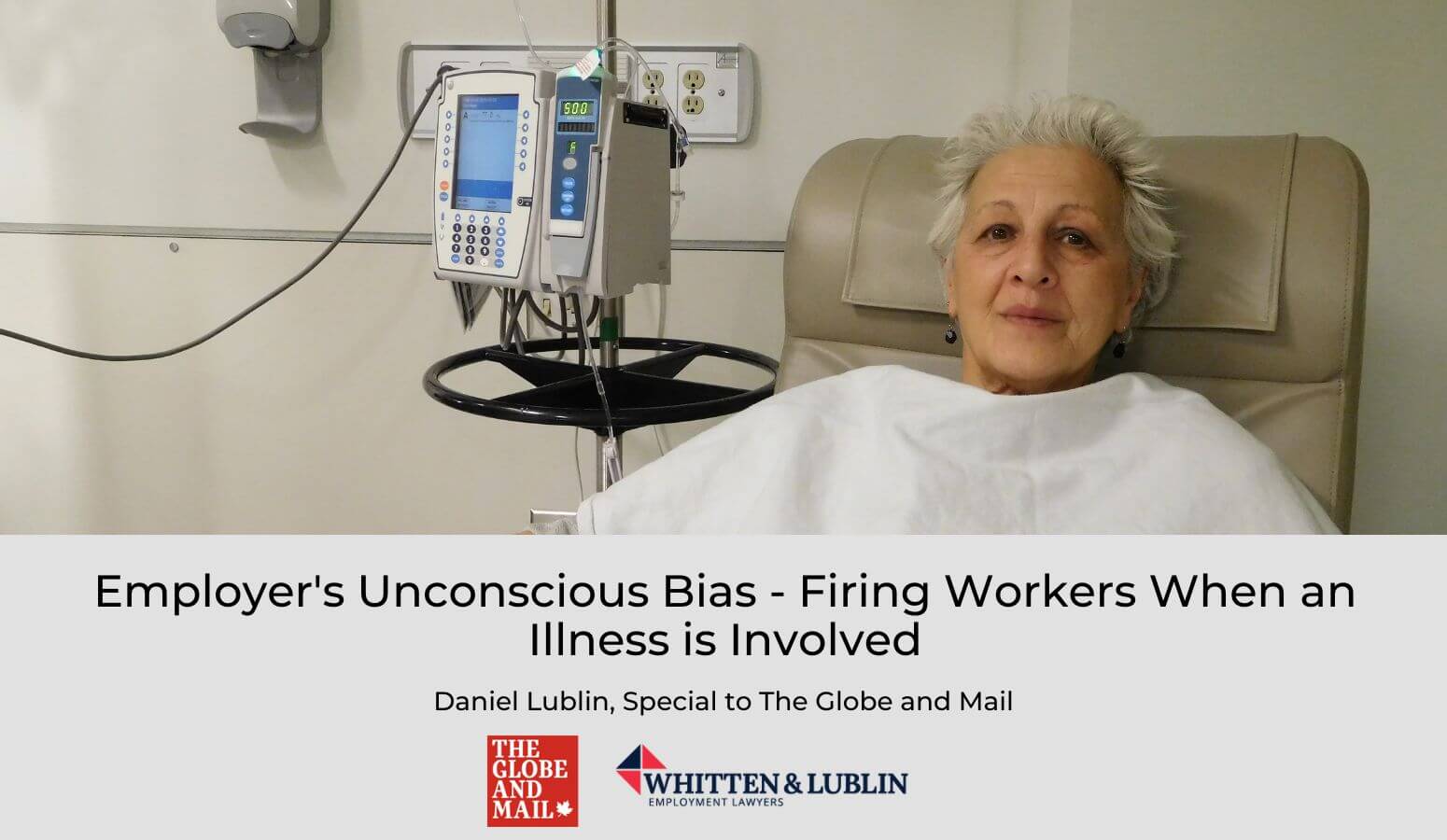 Far too often, employers make decisions that are tainted by discriminatory motivations, without even recognizing they are doing so. This practice is known as unconscious bias, and it is a serious legal issue that affects a large number of workers across Canada.

A recent, publicly available judgment from the Canadian Human Rights Tribunal highlights how unconscious biases can inadvertently lead to discrimination and the legal risks for organizations when termination-based decisions are not completely bona fide.

Soon after starting work as a business development manager for Bell Canada, Glenn Luckman was diagnosed with cancer. Mr. Luckman’s symptoms and need to attend to various medical appoints affected his focus and the quality of his work for Bell. To make matters worse, Mr. Luckman also cared for this ailing father, who was hospitalized during this time and eventually died.

Several months later, Mr. Luckman took medical leave to obtain treatment for his cancer. His initial attempt to return to work was unsuccessful as he was overwhelmed by the demands of his job and he had to resume his leave. Approximately one month after he returned to work a second time, he was fired.

The termination letter stated that his position was “eliminated” as a result of “changes in the organization.”

Mr. Luckman launched a human-rights complaint, alleging his termination was discriminatory. He claimed the main reason he was fired was because of his medical absence, triggered by his cancer.

In a human-rights proceeding, once an individual is able to demonstrate there is a reasonable connection between a termination and a protected ground of discrimination (in this case illness and disability), then the responding party must fully justify that its actions were bona fide and not based on any form of discrimination. In other words, if Bell could establish it dismissed Mr. Luckman for reasons unrelated to his illness or disability, then it could have won the case.

Bell first attempted to justify the decision by contending that a corporate restructuring required a work force reduction and that Mr. Luckman’s performance was substandard. However, the adjudicator hearing the case was skeptical. Mr. Luckman was the only employee on his team who was terminated and there was no cogent evidence suggesting his performance was ever an issue. In fact, his sales rankings and appraisals did not show he was underperforming. Instead, the tribunal found Mr. Luckman’s manager was concerned he would be unable to meet her high standards because of his medical condition, his leave of absence, and his potential need for future leaves, all of which she felt would disrupt her team. Accordingly, the tribunal found that Mr. Luckman’s medical condition was a real factor in the reason he was terminated.

Mr. Luckman was awarded compensation for lost wages from the date of his termination until the date he secured new work, approximately 11 months later. He was also awarded $15,000 for pain and suffering and then an additional $15,000 because, according to the commission, Bell was “reckless” when it selected him for termination while he was suffering from a disability. The tribunal opined that, despite Bell’s sophistication, no one considered whether firing an employee recovering from cancer could be offside.

The examination of unconscious bias and systemic discrimination in workplace cases is well-developed and acutely understood in human-rights proceedings. In my experience, most human-rights adjudicators are finely tuned to recognized when unconscious bias plays a role in discrimination, as in this case. Here, the adjudicator determined that Mr. Luckman’s manager must have unconsciously considered his physical and mental impairment when determining to dismiss him. In other words, even though Mr. Luckman’s manager may not have set out to fire him because of his cancer, her fears that he would not have been able to keep up with the demands of the job was still tantamount to a serious form of discrimination.

Employers are well-advised to pause before giving into unconscious bias and terminating workers in situations where a medical illness and or disability may be in play and to closely scrutinize whether there is any basis for coming to the conclusion to move on from a worker who may be connected to a human-rights concern. As this case demonstrates, failing to take even this step can lead to additional compensation being awarded.

There is also another point worth making here, which is the relatively low level of damages that seem to flow from serious cases of discrimination in Canada. Mr. Luckman’s story is a case in point. He was fired as a result of his cancer diagnosis and ended up with only $15,000 for pain and suffering, and an additional $15,000 in punitive damages, both of which amounts were deemed to be at the higher end of the allowable spectrum. Given Bell Canada’s size, its annual revenue and sophistication (as noted by the adjudicator), the relatively low amount of compensation it had to dole out in the circumstances of this case is cause for concern.

Daniel A. Lublin is a partner at Whitten & Lublin, representing both employers and employees in workplace legal disputes. He can be reached at Dan@canadaemploymentlawyer.com