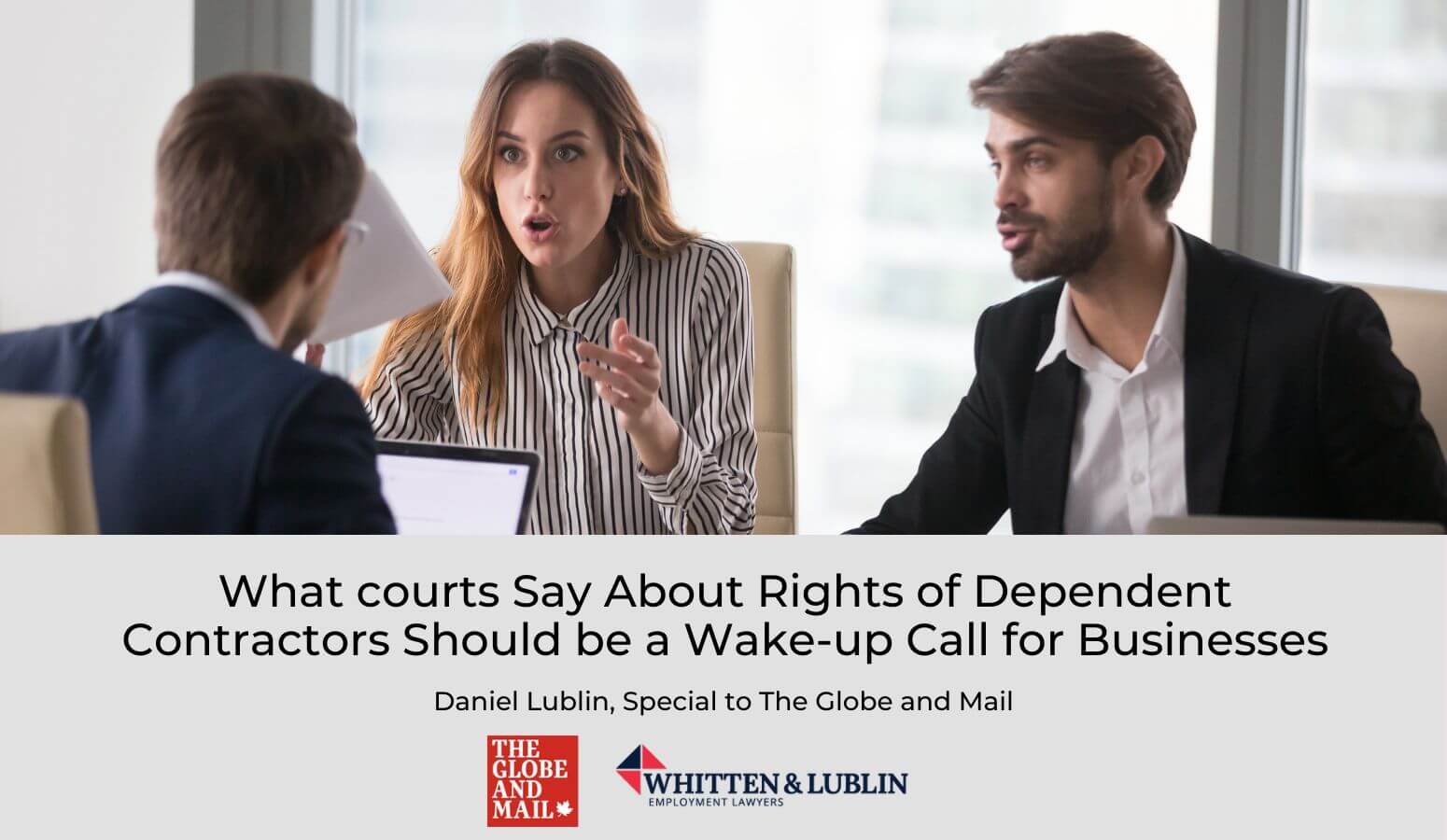 For many Canadian workers, the Pandemic has accelerated an evolution toward freelance work.

Both employers and workers are attracted to the flexibility that freelancing provides, which generally comes with fewer regulatory burdens and lower tax obligations. For instance, a self-employed contractor can generally deduct from their taxes certain expenses associated with earning income, whereas employees have no such luxury.

As a result, self-employed contractors, as opposed to traditional employees, now occupy far more of the labour force than before. Further, technology platforms, which make it increasingly easy to secure freelance jobs, are helping fuel the rise in workers leaving the conventional employment model.

Despite its advantages, true independent contractors do not have the same level of job security that employees receive. Their assignments can generally come to an end on minimal notice, often less than two weeks, and their engagements need not be renewed. Further, if an employer needs to restructure and lower overall costs, which often happens during a recession, contractors are far more likely to lose their jobs first, as there is limited severance and wrongful dismissal expenses to dismiss them, compared to the costs of terminating employees. Contractors have no right to statutory minimum termination and severance payouts (or to any minimum employment standards statutory requirements) and generally have no right to sue for wrongful dismissal in the event of an abrupt termination or constructive dismissal.

However, contractors can take comfort in the fact that the legal distinction between them and true employees seems to be quickly fading.

There is now a clearly recognized hybrid category of workers, called dependent contractors, who are self-employed by nature but nonetheless are economically dependent on their employers for the majority of their income. In recent years, there are numerous legal rulings from courts, labour tribunals and government agencies clearly establishing that because these workers operate in a fashion similar to employees, they should be entitled to some of the same legal protections.

Foremost, dependent contractors can be entitled to severance following the end of the engagements, in amounts comparable to what traditional employees would receive. Thus, older, specialized, and longer-term workers may be entitled to as much as two years’ compensation arising from their dismissals. Even younger but specialized dependent contractors can still claim severance far greater than one or two weeks’ pay for each year of service.

In more recent years, provincial labour tribunals, which regulate and enforce minimum workplace standards, are increasingly determining that dependent contractors should receive the same or similar minimum standards as employees. These labour tribunals are quick to scrutinize employers who misclassify workers as independent contractors and will declare that they are entitled to a variety of statutory protections, such as overtime pay, vacation pay, public holiday pay and a minimum wage.

Gig workers are also starting to see increased protections. In April, the Ontario Government enacted the Digital Platform Workers Rights Act, a first of its kind legislation in Canada. The act provides gig workers for online platforms, such as Uber, basic statutory entitlements such as a minimum wage, localized dispute resolution and information concerning their wages. Perhaps, most importantly, the new law protects gig workers from reprisals in the event that they pursue a wage claim or seek to enforce a prescribed right.

How do courts and labour tribunals determine who is a dependent contractor and thus entitled to these enhanced protections? There is an examination of how much time an individual works for one organization (for example, how dependent they are on one employer for the majority of their income); how much control the employer exerts over the way in which their work is performed; how integrated the worker is within the employer’s business; and how long the relationship lasts. While no one factor is dispositive, individuals who perform the majority of their work for one employer, especially for more than several consecutive years, are likely to be declared dependent contractors.

An individual can also be treated as a dependent contractor in spite of whatever documents or contracts they may have signed, providing otherwise. Judges and labour tribunals often show little regard for how the parties have self-described their relationship and put far more emphasis on how they have actually behaved. For instance, in one leading appeal court decision, the Court determined it did not matter much that the worker signed an independent contractor agreement, incorporated her own business, invoiced the employer for wages and hired her own employees. Given that she worked for 18 consecutive years exclusively for one employer and had become an integral part of its business, the Court awarded her severance as if she were employed.

These developments should come as a wake-up call to Canadian companies who mistakenly believe that outsourcing work to individuals who are called ‘contractors’ on paper provides immunity from employment standards claims, wrongful dismissal liability and a host of other regulatory matters. The legal distinction between employees and contractors is becoming increasingly harder to separate and maintain.

Daniel A. Lublin is a founding partner of Whitten & Lublin, Employment & Labour Lawyers. Do you have a question about workplace law? You can email him here.