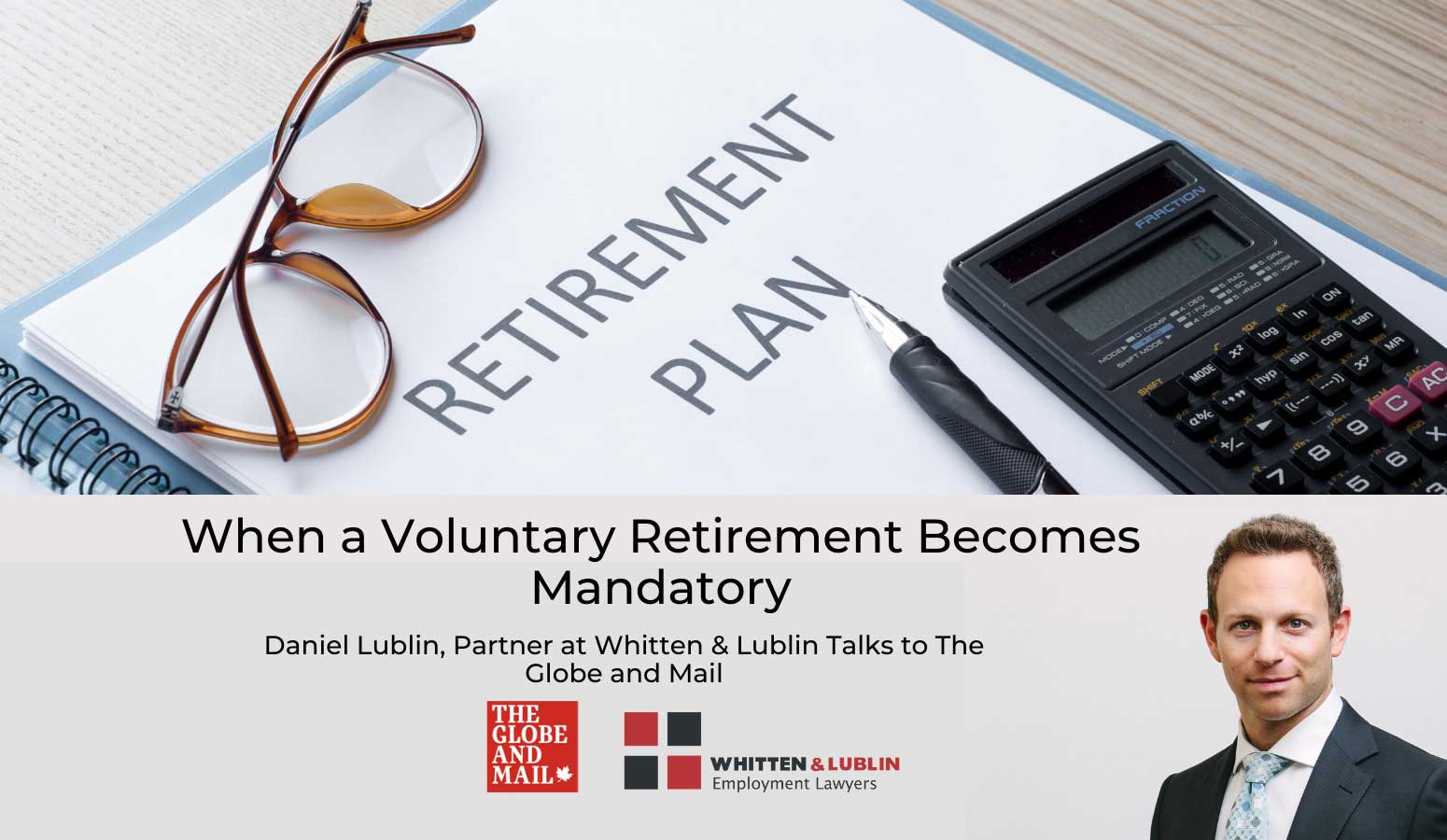 DANIEL LUBLIN, SPECIAL TO THE GLOBE AND MAIL

As Canadian baby boomers approach retirement age, many are hoping to exit the workplace gracefully and on their own terms. But what happens when an older employee who is choosing early retirement suddenly changes his or her mind? According to the Ontario Court of Appeal, employers who confuse an employee’s retirement plans can unintentionally dismiss them.

Elizabeth English was turning 65 and planning to retire later that year. However, her plans changed after the company she worked for was acquired by Manulife Financial. Ms. English was told that she would have to retrain on a new computer system being introduced at work so she decided to accelerate her retirement timeline rather than learn the new system, hence opting for early retirement.

She met with her supervisor and told him she would retire early. Sensing that Ms. English was uncertain, he asked whether she was sure. Ms. English responded, “not totally”. Ms. English was told that if she changed her mind, she could withdraw what was effectively her resignation. On this basis, she then submitted a typed letter confirming her decision to soon retire.

Several weeks later, Manulife announced that it would no longer proceed with implementing the new computer system. The next day, Ms. English approached her supervisor and said she was withdrawing her early retirement notice as a result. However, Manulife had already announced her pending retirement and told her that it was too late to change her mind. Ms. English immediately protested, sending her manager a letter reminding him that he said she was free to change her mind. Manulife disagreed and told her not to return to work. Believing that she was forced to leave earlier than she intended and that it amounted to a termination, Ms. English sued Manulife.

At a hearing before the Ontario Superior Court of Justice Mark Edwards, Ms. English was found to have essentially resigned from her position. Justice Edwards found that Ms. English’s typed letter of retirement was clear and unequivocal and that, once accepted by Manulife, she, in fact, had resigned.

However, the Ontario Court of Appeal recently overturned the judgment. It was an error to characterize Ms. English’s notice of retirement as unambiguous, according to the court. When asked if she was sure she wanted to retire, Ms. English responded that she was uncertain. She was then told that she could change her mind, which she attempted to do once she realized she no longer needed to retrain. The court unanimously ruled this was not clearly a resignation and Ms. English was awarded one-year’s severance.

A true resignation leaves nothing in doubt. Manulife erred when it didn’t see it this way.

According to a 2018 labour force report, workers aged 55 and older accounted for nearly 40 percent of Canada’s working population. This figure is expected to rise over the next several years. Given the aging demographics of the workforce, vastly more age-related employment disputes are likely to play out across Canada as both corporations and older employees grapple with unique challenges posed in the post-mandatory retirement era.

The most likely source of contention will be where hiring or firing decisions affect a large number of older employees. My office is now handling far more cases like this than ever before as companies, often larger ones, covertly seek to reduce the age of their workforce through a larger-scale restructuring that on its face appears to target all employees equally but has the effect of singling older workers out.

Even in situations where there is no discriminatory intent, the case law is quickly evolving. Several recent court decisions around severance packages speak to the difficulties that older workers will have finding comparable work. In these cases, the courts awarded disproportionately greater severance amounts to older employees, effectively bridging them to retirement, illustrating the importance of age when determining fair severance.

Finally, although there did not appear to be any ill-intent against Ms. English, there will be situations where companies will snatch up the opportunity to say goodbye to an older worker who indicates an intention to retire. Employees should immediately protest any assertion of resignation if that was not the intended result. Further, if uncertain about retirement plans and being asked or pushed for an answer, employees should demand they be given the time to consider their options and then seek legal advice before taking any action, especially before leaving the workplace for good.

For their part, employers must be particularly cognizant of any age-related challenges that could prompt early resignation, otherwise, they risk potential lawsuits or human-rights complaints even in situations where an employee appears to voluntarily leave. Changing technology, schedules, and work location often affect older employees differently than younger peers. Decisions based on factors that, while not directly linked to age, but nonetheless prejudicially impact older workers, can amount to constructive discrimination.

Daniel A. Lublin is a founding partner of Whitten & Lublin, Employment & Labour Lawyers.