When it comes to vaccine mandates, how do unionized workers differ from non-unionized? 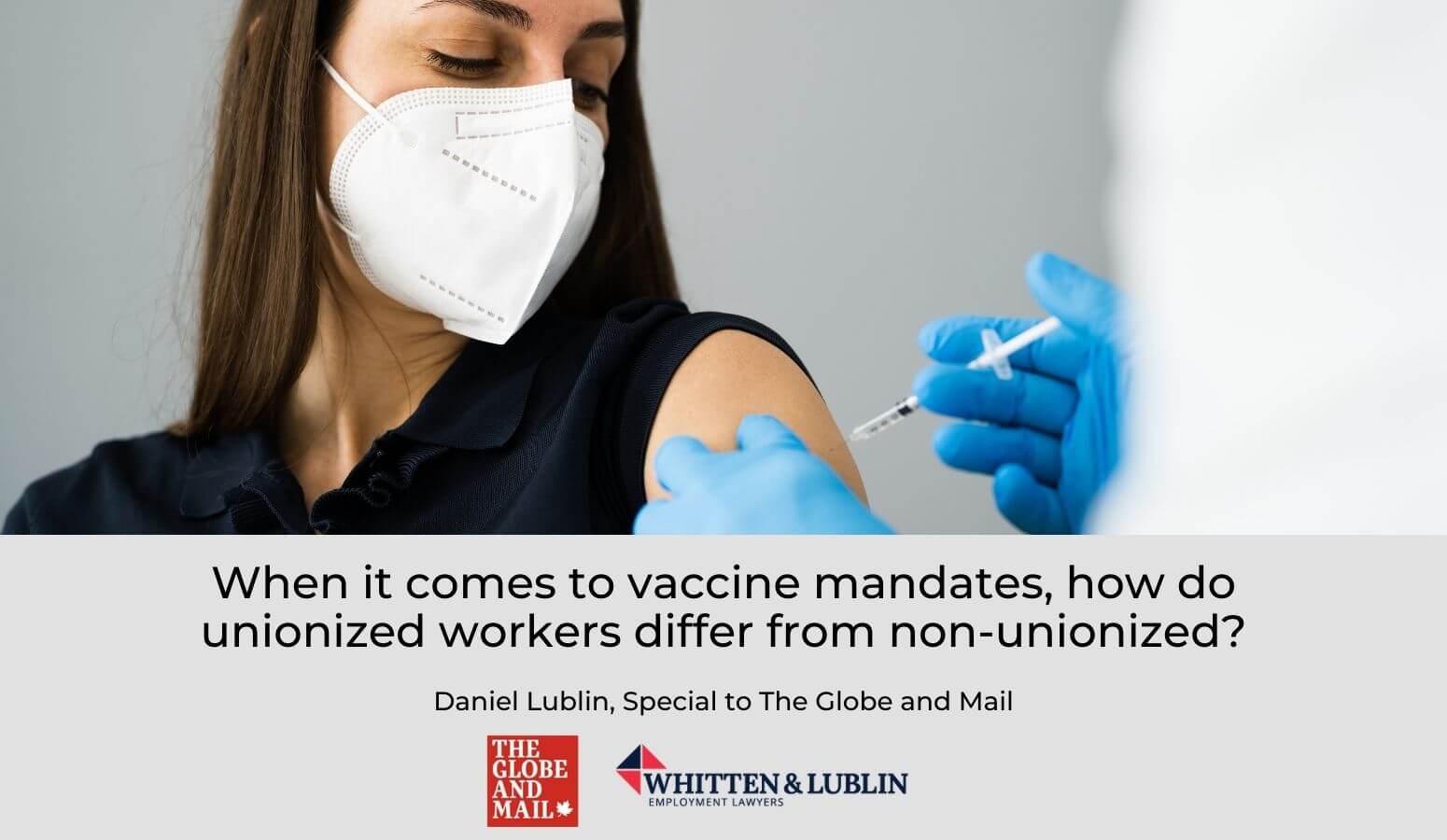 Some unions may be headed for a breaking point in Canada.

The imposition of mandatory vaccination programs at workplaces across the country has led to many unions choosing to quietly align with employers on this important topic. However, in doing so they may have betrayed or in some cases even abandoned many of their own constituents who oppose the policies or the fact that employers implemented them unilaterally.

Lately, I have received countless calls and e-mails regarding vaccine mandates for unionized workers who are searching for answers when it comes to their workplace rights. Many are very surprised to learn how those rights differ so vastly from their non-union peers.

If an employer terminates or constructively dismisses a non-union employee, he or she has the right to hire a lawyer and sue. That lawsuit may be for more severance, benefits, bonuses or other compensation or it may also be focused on the manner of dismissal. Critically, non-union individuals have the right to make strategic decisions that affect their own case, such as which lawyer to hire (or fire), what settlement offers should be extended, when to push forward to trial and most importantly – when to settle and in what amount. They pay their own legal fees, but if their case is successful, some of those costs are ultimately recovered.

In contrast, unionized employees cannot be dismissed without just cause. If they are let go, they have no right to sue in court for wrongful dismissal. Instead, they require their unions to file grievances and to argue on their behalf in front of an arbitrator that is agreed to by both sides. While these arbitrators have similar powers as judges, unionized employees have little to no say when it comes to whether their case ever reaches a hearing or what type of settlement they will receive.

Even if they have a legitimate or a strong case, the union has the right to refuse to pursue it. This is because unions control the entire dispute process as they are legally entrusted to make decisions they believe are in the membership’s best interest, even if those decisions are contrary to the interests of any individual member or group of members.

Mandatory vaccination policies are a perfect example of how unions can make decisions on behalf of employees, as many unions are quietly siding with employers’ efforts to implement these policies, even if a smaller proportion of members are very opposed.

On this issue, as with all others, unions base their decisions on their independent view of what is in the best interests of their overall unit, without regard to whether some individual interests or preferences would be disregarded. If pursuing a grievance could potentially set a bad precedent or result in seeking reinstatement of a problematic employee, the union can refuse to take an otherwise perfectly meritorious case. With respect to vaccination policies, some unions are refusing to even fight these policies on the basis that the majority of members are vaccinated. This poses a real problem for the unvaccinated employees. Unlike non-union employees, if a unionized individual feels that his or her workplace rights are ignored, without the union’s assistance, there is only one remedial option.

That option is to challenge whether the union is fairly representing them. However, few such claims are successful and only if the employee can show that the union’s decisions were arbitrary, discriminatory, or made in bad faith. If a union has any other reason to refuse to advance a grievance, it can do so without consequence and the employee’s discipline or dismissal will be upheld.

Even if a union does agree to advance a grievance, an employee may not be happy with the manner in which it proceeds. Unionized employees do not have to pay for their legal representation – but this comes with a catch. Unions can choose to try to settle a case without a hearing and the union’s lawyers are instructed by the union, not the employee. Also, if that lawyer seems disinterested or too busy, there is no right to fire him or her and obtain a different one.

There is one final question I am often asked about lately, which is whether unionized employees can legally quit the union. Unionized workers cannot elect to opt-out of the union and cease payment of union dues. However, a group of unionized employees can petition to decertify their union, although successful decertification hearings are few and far between.

The interests of unionized employees and their union may not always be aligned. The pandemic is making that more apparent.

Daniel A. Lublin is a founding partner of Whitten & Lublin Employment & Labour Lawyers. Do you have a question about workplace law? You can e-mail him here.