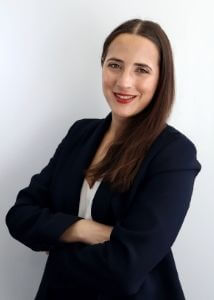 Nadia Halum is a dedicated labour and employment lawyer who understands that work can be, and often is, one of the most fundamental aspects of a person’s life. Having joined the workforce at an early age and been employed in a variety of roles, Nadia became attuned to the tensions that can arise in a workplace and made it her goal to dedicate herself to workplace law. She has been practicing labour and employment law since she was called to the Ontario Bar in 2016. She advises and acts for both employers and employees on issues ranging from wrongful and constructive dismissals, contracts, human rights matters and workplace harassment complaints. Nadia has appeared on numerous occasions  before the Ontario Superior Court of Justice and its Divisional Court, the Ontario Small Claims Court, the Human Rights Tribunal of Ontario and the Ontario Labour Relations Board.

Nadia received her law degree from Osgoode Hall Law School, where she graduated in the top 10% of her class. She also holds a Bachelor of Arts degree in International Relations from the University of British Columbia. During law school, Nadia completed a practice placement at the Human Rights Legal Support Centre, a government-funded institution that provides legal advice and assistance to individuals who have experienced discrimination in Ontario, both within and outside the workplace setting, while also serving as a student coordinator and caseworker at the Centre for Spanish Speaking Peoples’ legal clinic.

Nadia speaks fluent Spanish and is actively involved in the Hispanic community through her roles on the Board and Executive Committee of the Canadian Hispanic Bar Association.